In today’s economy, many Americans have been forced to sell their homes for significantly lower than their original asking price. If you fall into this category, take heart that you aren’t alone: this trend has impacted the real estate market from the top on down. As Forbes reports, even the most expensive homes in America have seen their asking prices reduced in order to sell. 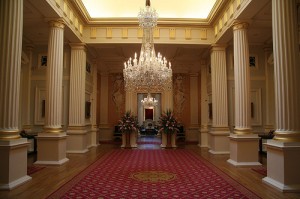 One example is Le Belvedere, a sprawling mansion in Bel Air, California. Real estate developer Mohamad Hadid – known for developing five-star hotels for Ritz-Carlton – originally put the 10 bedroom, 14 bathroom estate on the market last year for $85 million. However, after he had trouble finding a buyer at that price, he was forced to reduce the asking price by more than 15 percent and cut it to $72 million. The tactic appears to have worked – the estate is now in escrow for an undisclosed price.

Another example is the Bootjack Ranch, a rambling property in Colorado. The ranch’s owners had to reduce the asking price several times from the original $88 million price tag. The estate sold earlier this month to an undisclosed buyer for $47 million – almost half of the original asking price.